Professor Vicky Sama was lured from producing news at CNN to the halls of higher education. She is the Chair of the Department of Journalism and Mass Communication and teaches courses in Media Law, Ethics, Analyzing Mass Media Messages, War Reporting, Sports Journalism, Video Production and Magazine Production. She is the faculty adviser for the Journalism Club and former long-time adviser of the award-winning student Osprey magazine.

She joined Humboldt State University in August 2006 after teaching at the University of Colorado in Boulder and at the Universidade de São Paulo, Brazil. Prior to her academic career, she was a journalist at Cable News Network where she was a producer, writer, copy editor and field producer in Latin America covering cocaine cartels, guerrilla wars and violent presidential elections.

She earned her graduate degree at the University of Colorado and bachelor's degree from Montclair State College. She produces content for several outdoors magazines and other publications. Her favorite subject--cycling. Outside of class you can find her riding her bicycle, probably in the mud.

Professor Sama is a regular co-host of the monthly public radio program "Signals and Noise," which analyzes issues in the media. 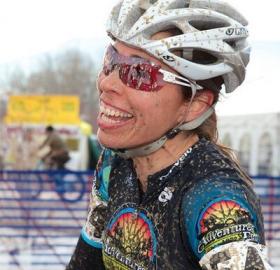